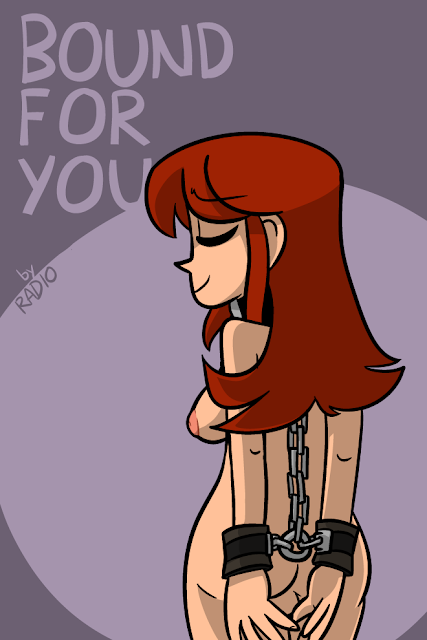 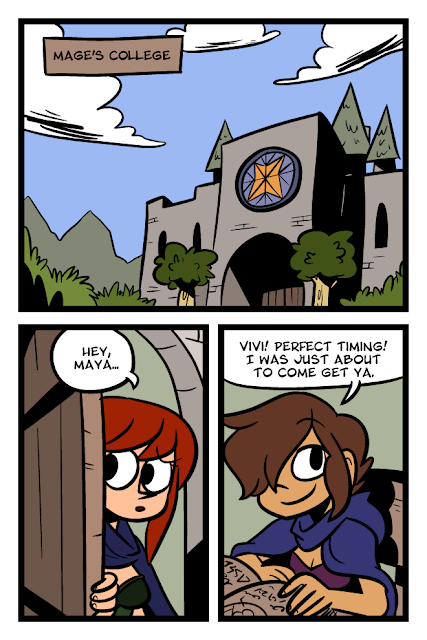 All of radio’s comics on this website take place in what is essentially an alternate world that mimics a lot of fantasy conventions, including the typical conceit that men and women are in equal social standing. This concept is common in both Japanese and western RPGs and their derivative fantasy materials, but is often destroyed by common tropes about men and women that establish something more like a “separate but equal” hierarchy where women are the spellcasters and ranged weapons experts or are in some way involved in indirect combat while men are the fighters and defenders and paladins and generally involved in classes that require direct strength. Gender is important to us as people, so we’re not about to let it go unexpressed in anything we create. 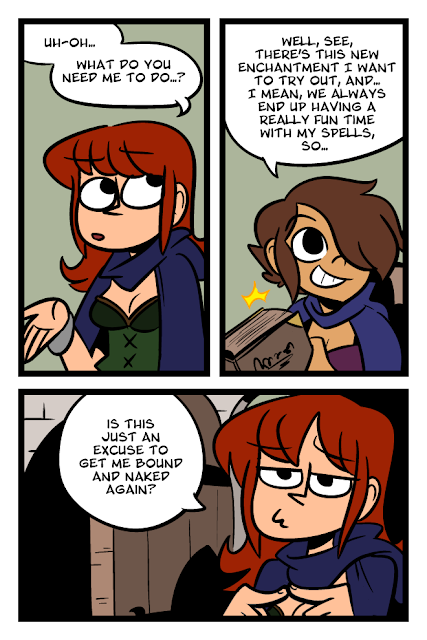 The comic has established that these two characters have a relationship and a previously sexual one. Given the construction of most pornography as spontaneous sex outside of any pre-existing contact, we’re already beyond the pale. 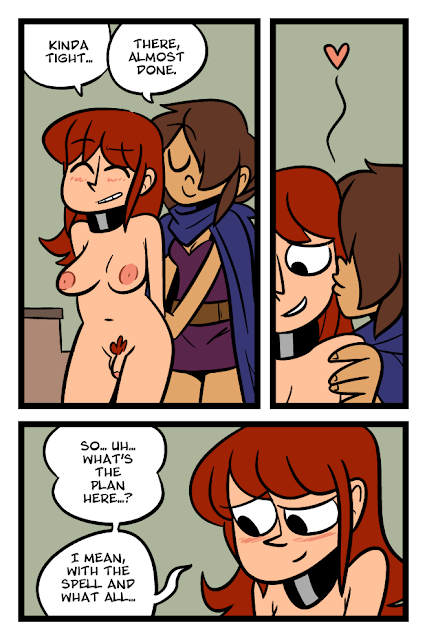 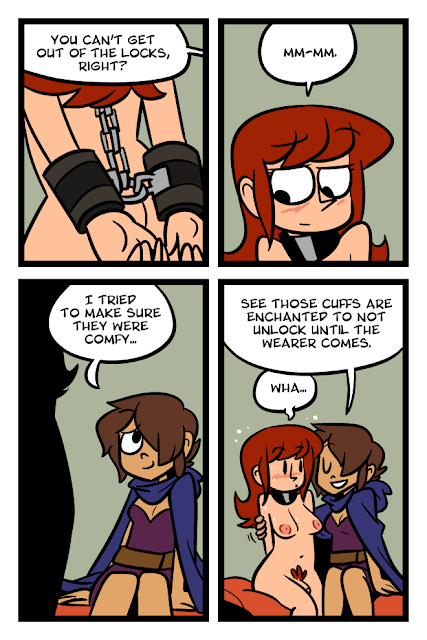 This is largely here for continuity’s sake. Most of the rest of these pages are sex. Notice the continued motif of realistic boobs and large areola. One of the weirder concepts of beauty created in the last 60 or so years is the creation of the “perfect nipple,” rejecting the majority of women, who have a wide variety of shapes and sizes of nipples and areolae. Since women’s bodies are their most valuable possessions, this sort of arbitrary limitation has created many many insecurity complexes. Featuring even one or two deviant body shapes in pornography helps to reinforce that all people are sexy and all people are different. There’s no right way to be attractive. 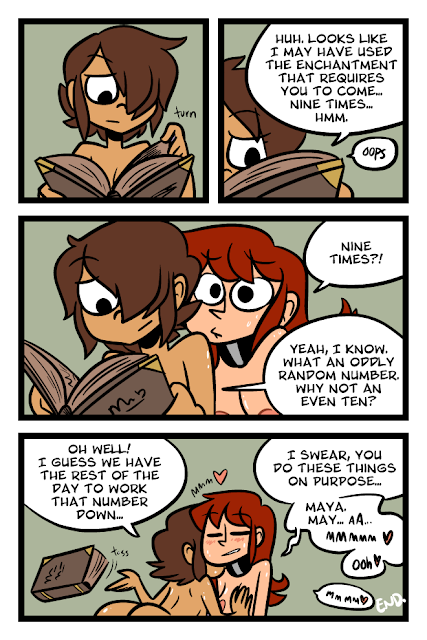 As I mentioned above, heterosexuality demands that men be the dominant pursuers while women be the pursued objects. To use a frequently employed /r9k/ virgin Nice Guy™ metaphor: women are the locks while men are the keys. In this metaphor a good key is a key that opens a lot of locks. A bad lock is a lock that is opened by a lot of keys. This concept creates and sustains the idea of sexually forward women as sluts or whores or inherently unclean and unworthy. Pornography on the whole is very conservative, so the majority of women in pornography adhere to this concept. They’re shy or demure or basically unwilling to fuck until a certain amount of skill on the side of the man loosens them up.
Sexually forward women in pornography are frequently marginalized as products of abuse, debased monsters without shame or many other constructions that serve to explain why a woman would deviate from the Nice Guy™ norm. In Radio’s comics nearly all of the women are sexually explicit, frank about their activities and desires and are not shamed or marginalized or otherwise denigrated. 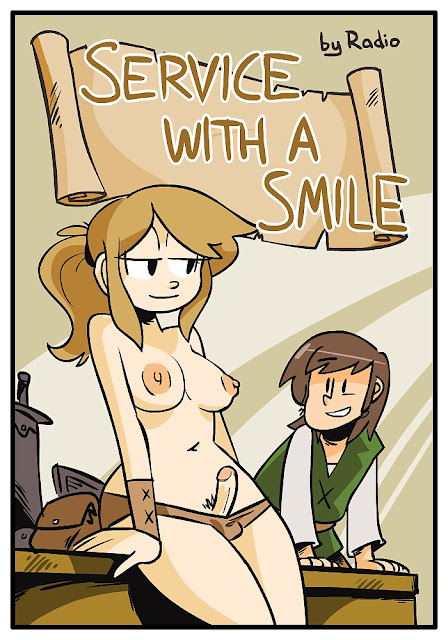 So as you’ve probably figured out, the handcuffed woman from the last sequence had a penis, just like this woman does. The people are very explicitly women, with all the hairlessness and bone structure and fat distribution that women would have. The only difference is in genitals. In a lot of ways this is constructed as a transwoman ideal, to have very obviously female body without having to surgically trade in conventional sexual pleasure. These characters are not explicitly trans, though. They’re just women with penises, the ultimate divorce of genitals and gender. This means we’re operating in a context where some women simply have penises and no one bats an eye at the matter. 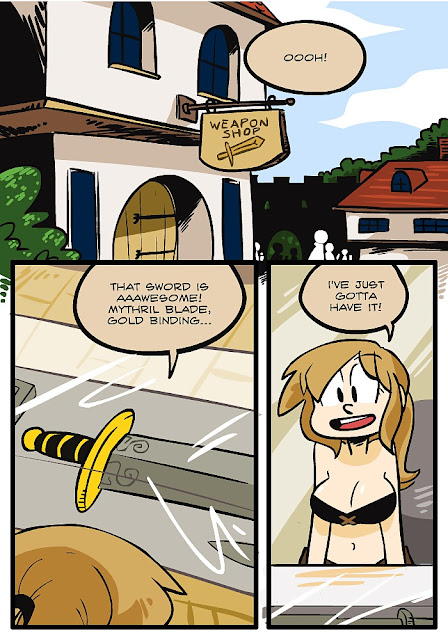 Right away we establish that this woman is an adventurer or possibly just a collector of weapons, and she has fairly large breasts. As I mentioned earlier it is uncommon for a woman in a fantasy setting to wield close-range weaponry and doing so tends to reflect on the construction of their personality. 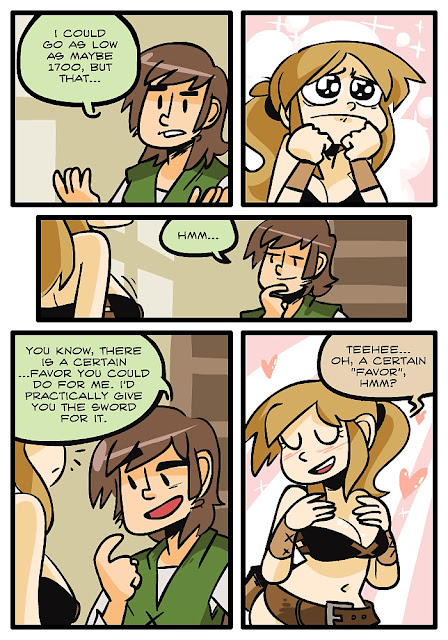 The gist of the story is that Hayley here covets that sword but can’t afford it. She assumes that she is about to exchange sexual favors for the sword but is instead put to work cleaning. 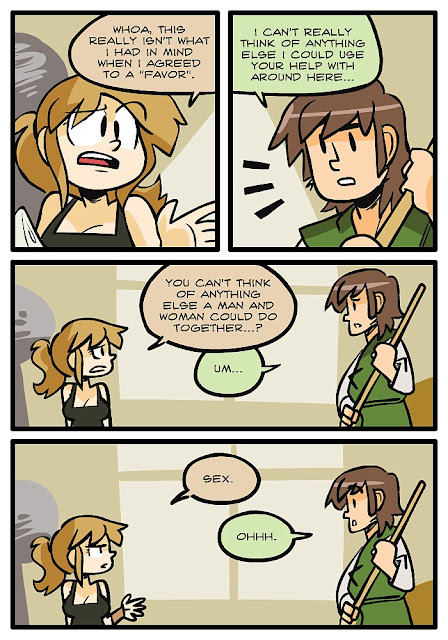 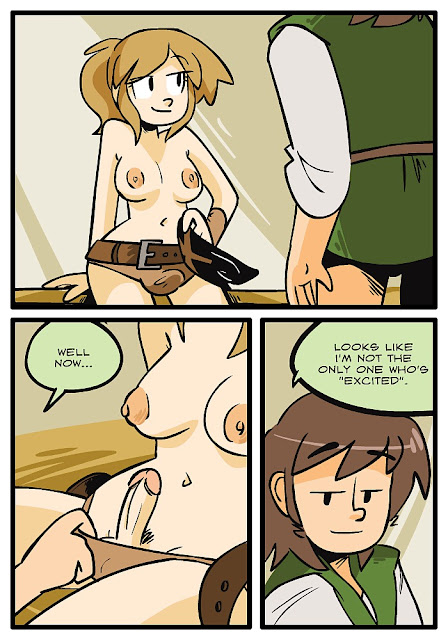 This is about the moment that inspires homicidal rage in heterosexual men who have otherwise been led to believe that the woman’s genitals were what they expected. Encountering a penis transgresses a very important part of hetero identity, that they find men repulsive and penises repulsive as an element of men. Reaching the point of imminent sexual activity with what they presume to be ciswomen and having their partner revealed to be transwomen directly challenges that belief, since they were attracted enough to get them to take their pants off in the first place. The identity crisis ends up sort of deadly, since the identity is so strongly ingrained into the character of men and masculinity and femininity is so thoroughly devalued in culture that it becomes basically enraging, and worse enraging with a nearby target for that rage. Clearly it’s the “trap’s” fault for placing them in this situation, for challenging their notion of what a woman is or means or what they could be attracted to as a heterosexual male.
Here, this situation is handled with a “well now…” It’s hard to express to you how transgressive it is. There are some of you in the audience reading and looking askance, since futanari and dickgirl porn is about as common on the internet as rice is in china, but those are different situations, typically handled in different ways. This approach is both casual in presentation, but the sex presented isn’t particularly fetishistic and there’s not the constant and overt displays of femininity that sustain the concept of futanari. I’ll be talking more about this as this project goes on. 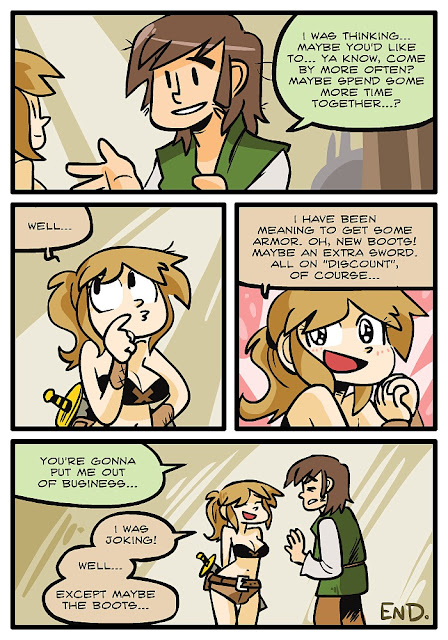 So if that isn’t enough, we’re presented with a male who is interested in continuing and possibly establishing a deeper relationship. It’s consistent with his previous nonpredatory behavior, but it’s still emblematic of a divergent social script. Instead of the man here disposing of his sexual interest at earliest possible convenience, it’s the man who is more interested in continuing things than the woman. 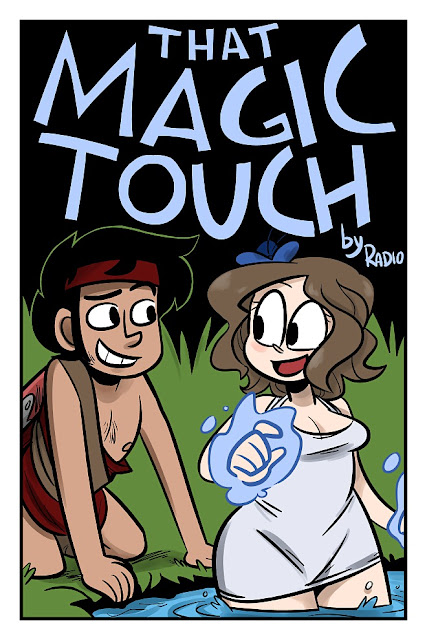 This last comic is mostly in black and white and I don’t have as much to say about it. It proceeds like the last two, with a cute premise: one character is a warrior who defeats a monster but is exhausted. The other character is a woman who just happens to be bathing nearby. The spring is a magic spring of rejuvenation, which naturally demands that the healed take their clothes off. 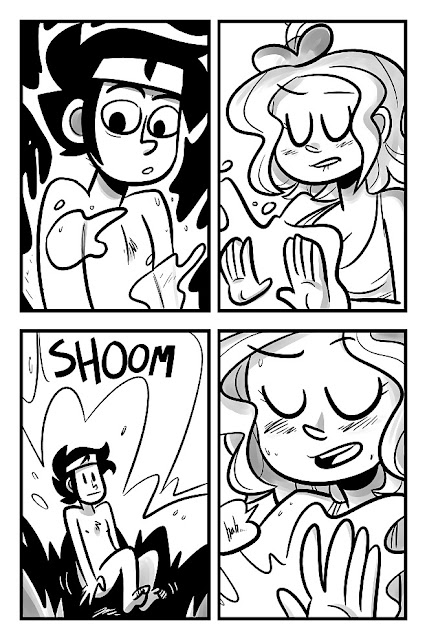 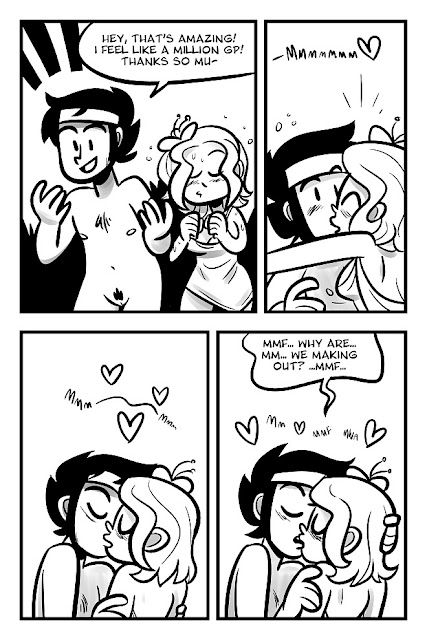 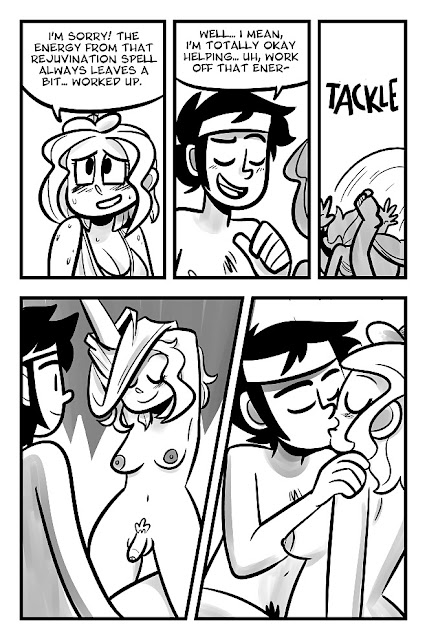 As you might have noticed, this dude doesn’t have a dick. This lady does. “Cuntboy” pornography is a particular branch of rarer pornography that features just the opposite of “dickgirl” pornography and is most similar to transmen in morphology. A man with a vagina is ultimately less threatening and perpetually less interesting to talk about in society, since we’re more interested in catering to heterosexual male interests and needs. Since transmen are men who present as men, their existence is not in any way dangerous to other men since they’re not expected to be attractive to other men. The only men who would be surprised or challenged by their existence would be gay men (who are indeed frequently threatened by lesbians. It’s complicated.) who are already breaking social norms to have this contact in the first place. In many ways this is why both lesbians and transmen are completely marginalized by social movements promoting social and sexual equality. Since neither of them interact with nor threaten the ruling heterosexual male hegemony, neither of them is considered particularly important or interesting. This is why, for example, despite there being at least a dozen gay male bars in the french quarter/marigny area of new orleans alone, there are no lesbian bars in the entire city. This is why when trans issues come up in the news, it’s issues of transmisogyny or acceptance of transwomen identities and never transmale issues. Despite recent efforts toward uniting Trans*under a single banner, this simple and unavoidable reality that is frequently ignored by many ardent trans movements that prevents a legitimized unity. This problem is similarly reflected in LGBT organizations that frequently devolve into just G organizations. (Or GL at best)
The rarity of transmen porn next to the commonality of transwoman porn is yet another reflection of this issue. 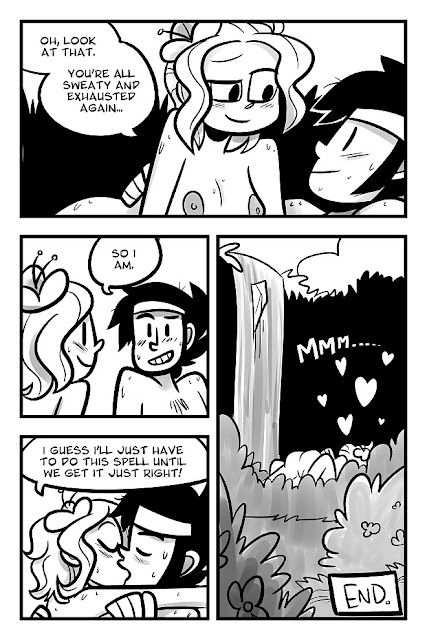 Radio ends the comic with a cutesy message and a promise of more sex to follow. Many of her comix are actually pretty formulaic. Cutesy fantasy inspired setup, particular variety of queer sex followthrough, and a punchline that presumes more inevitable sex. It’s a simple approach and thoroughly sex-positive one. Radio’s characters like having sex with each other and generally are happy about the experiences they have. Even this simple thing is a rarity in pornography. Often pornographic works will feature disdainful or resistant women being dominated by a man who is uninterested in her particular sexual pleasure and after he gets off the designated number of times, he’s appropriately no longer interested in having anything to do with his used sexual object.
This is why I appreciate Slipshine as a creation more than anything. The founding concept behind it is the simple idea that sex is awesome and everyone loves it and the site features a broad array of artists that typically work in webcomickery displaying their artistic talents in creating sex comix. Every single work on that page is upbeat and funny and features characters doing sex because they want to and enjoying the sex they’re doing. Contrast this with even last article’s depiction of broken homes, crying sex partners, weird fucked up gender norms. It’s a queer future and we’re all going to be better off living in it.
Written by Coyolxauhqui at 7:15 PM