War on the Internet

Earlier this year, I wrote an essay (more a press release, really) on the Wikileaks release of documents concerning the Afghanistan war. I was (and am) elated that the leak occurred, as it demonstrates to me the part and parcel purpose of the internet, the free dissemination of information to all those with access. As I'd hoped, Wikileaks has only grown in notoriety since. The timing of the arrest of Wikileak's founder Julian Assange coming shortly after his organization's release of embarrassing diplomatic cables is not a coincidence, especially when the circumstances surrounding his arrest are so suspect. How does it happen that a man who is called to be executed by a former U.S. presidential candidate is arrested mere days after such a release.

How does it come to be that he is charged with sexual assault that may or may not constitute rape by two women who admit that the sex was consensual and in fact bragged about it on Twitter and Facebook? Two women who had not actually accused him of anything, instead following a Swedish procedure of asking for "police advice," which does not constitute an accusation in case the accusation itself is wrongful. Why is he in prison when the actual case against him was charged, then dropped, then charged again be three separate prosecutors. Why is he in an Interpol warrant for this situation, where Swedish authorities only want to question him about the allegations? Why did Swedish authorities refuse to use any of the proposed alternate methods of communication to achieve such questioning? Most importantly, why was he imprisoned and denied bail in Britain despite turning himself in and not being formally charged with a crime? I'm really not claiming there's any sort of conspiracy here. This IS the authority, and this IS what they do. There's no cover-up of motive here, it's bald and plain for anyone to see.

The man is a political target, and he's made enemies with some surprising people. Sarah Palin wants him dead. Despite being a popular media figure and the host of an absurd pseudo-reality TV series about how to backpack with a lot of money and people with you, she's willing to call for this man's blood, in a move that would seem politically expedient for the entire "right" spectrum of politics. This is disregarding the fact that there really is no U.S. law this man is breaking, nor has anyone actually come to harm because of his organization. It is, of course, points in a political game. The right wants to convince people that Obama is incapable of defeating Julian Assange for one reason or another, and that by voting Republican, you can elect someone who can/will. Palin for president; She always gets her man. No one has yet pointed out that this is the same organization that exposed her own corruption through her e-mails.

The scope of this conflict, however, is much larger than the petty partisanship of politics in P'america (Couldn't break the combo). This is truly a war about democracy and what role the people have in shaping their own government. The concept of democracy does not include the concept of the government keeping secrets from its populace, as the populace is indeed the government, as per the intent of the founding fathers. By claiming security interests in keeping secrets, the government has managed to divorce itself from the people and become an entity unto its own. Here at last, the capability of the people to share information with one another instantly and for such little cost demonstrates the ultimate folly of attempting to keep state secrets. What was once a matter of determined investigative reporters is now a matter of simply finding a hole in the system, an inevitable hole because no system comprised of people can truly be completely secure. The government failed to keep these documents secret for the same reason that conspiracies are almost universally unlikely: Humans are the weakest link. Giving anyone the authority to view this information is a risk. What if they disagree with your findings? What if they have a moral change of heart? There will always be leaks, whether or not there's someone there to report them. And here, now, with Wikileaks, not only is there someone to report them, but someone with the capability of disseminating these leaks instantaneously to everyone with access to the web. The same system that has everyone worried about their privacy and well being through outlets like Facebook has also inevitably destroyed the privacy of the U. S. Government.

This is the internet at its best. This is ultimately what it was made for, the dissolution of borders and nations and governments. This is an entity that is too large for the nations to simply shut it off. This is an entity without state borders, except its own. This is, at last, an entity who has no political agenda but its own agenda of sharing everything with everyone at all times. It heartens me to see the usually nebulous and poorly aimed Anonymous banding together to defend what is ultimately going to be the first war on the internet through attacks on the corporations that have decided that their allegiance to the systems in place are more important than the services they provide. It heartens me that in response to the shutdown of the main Wikileaks website, not one or two, but hundreds of mirror sites sprang up overnight in defiance. Go internet. I'm right behind them. And if you care at all for our freedom, not as citizens of the United States, but our freedoms as people, so are you.

Written by Coyolxauhqui at 6:40 PM 2 comments:

I need to put together a list of things a person should never study if they want to ever view the world in anything like a normal fashion ever again. The color wheel, for one. Studying the way color relationships work gives you a pretty thorough ability to understand why certain things are certain colors (at least when it comes to human-created objects). You pretty go from thinking "oh, that looks nice," to thinking "Aha, what an interesting use of a vibrant triadic relationship in that purple and green bus logo with the yellow highlights," like the total pretentious douchebag you are.

Another thing not to study: how gender is performed and presented. Twisted pixel literally just announced a sequel to their "'Splosion Man" game, titled "Ms. 'Splosion Man" as a homage to Ms. Pac-Man. The picture announcing the release is this:

So, take a look at that. This is a female version of a male character (more or less) and despite being a freakish being of non-organic origin and thus without any meaningful physical markers of sex (as a creature whose sole purpose is to create violent explosions, it's probably wise to leave out a function for it to reproduce by), here we have a very clearly female character. Take a look (you probably already did) at dat ass. It literally bulges. You can also catch a glimpse of side cleavage. Clearly all of the scientists are madly in love with her/it (note little hearts) with the exception of the evil looking characters up top, who seem indifferent. Note the female evil character in the upper right (as marked by the pronounced lips and longer hair) appears to be angry. Jealous? Upset? Who knows.

Besides the very obvious assets of the character, notice a few other details marking her/its femininity. The bow on it/her head, the eyelashes long and curved, and her pink color. All additional and non-physiological symbols of femininity. More importantly, notice the fingers and the way her/its hands are splayed. That's a very feminine pose to put a figure in. When I was a kid in elementary school, I was subject to a somewhat absurd assertion that there was a "right" and "wrong" way for a guy to look at his fingernails. The correct way was to look at them with fingers folded over an upright palm, halfway to a fist. The wrong way was to view them extended from the back of the hand. Viewing your fingernails from this position meant you were gay, just as much as a limp wrist or a tongue in your cheek. I'm sure there are a bunch of interesting psychological reasons that having your fingers out and strangely arrayed is considered weaker. I think the simple fact hat it is not a fist probably suffices.

The teaser image isn't the only expression of femaleness, either. Check out the logo for the new game. 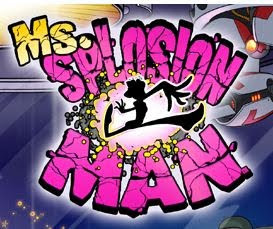 Notice how again, the character has her/it's fingers splayed in a strange and feminine manner. Also notice that her feet are, besides being more shapely than regular 'splosion man's, positioned like a ballerina doing a leap. Also note the cleavage and protruding butt. For proper comparison, here's the first game's logo:

Ultimately the result is otherwise perfectly enjoyable things becoming exercises in analysis where the struggle to understand a work supersedes the actual consumption and enjoyment of the work. I sometimes worry that if I learn too much about the world and its processes, I'll become completely unable to appreciate anything and only capable of recreating the exact creative steps that went in to building an expression. Eventually I will become so wrapped in referential icons and indices that I'll somehow morph into a postmodernist writer who can't write a damn word without referring to half a dozen other things within or without his own work.

Written by Coyolxauhqui at 12:18 AM No comments: