I was initially against the OWS movement. I hated the concept vehemently. I thought the protesters were stupid, naïve idiots with no plan and no hope. Most importantly, I hated it because it was so close to what I’m looking for in a revolution. Fuck capitalism, fuck the system, etc, etc. I love change. Change is great and you should radically destroy everything in your life and rebuild over and over. But Occupy was not that at its start. It was a protest, just another march, just another of the endless line of people who think that waving signs and yelling is going to bring about change. It’s not people with guns, it’s not an armed insurrection against the standing order, it’s a lot of kids waving and yelling about idealism and feeling good about themselves for doing so. “I made a difference” they say when they go home from the marches. “I’m intellectually consistent in both practice and thought.” It’s a warm fuzzy feeling that basically lasts until the next outrage does. It’s impotence given a voice and cardboard and a sharpie. That is what Occupy was at first.

But hey, maybe these guys do have an idea. They’re taking "occupy" pretty literally. They’re still there now six weeks later. They don’t have any more direction than they ever did, but they’re still there. They haven’t left. The system in power has decided that they don’t like it. That it’s starting to become more than a cute bunch of kids showing how great and socially conscious and civic-minded and morally superior they are. They’re “overstaying their welcome” and “going beyond first amendment rights.” So the system in power is marching out there and removing Occupy with force, using the same list of justifications as any other tyrannical regime. Make no mistake, we live in a country that does not represent us or our views, no matter what they are. The Tea Party as established was a response to this, a response that really only became noticeable because it courted the easiest section of the population to sway to anger, the ones that always have and always will believe our country is going to hell for one reason or another. Occupy is the same movement, but aimed at swaying those previously unswayable, the bright-eyed idealists and pragmatic bleeding-heart types who can’t support anything that seems too dogmatic because dogma is just kind of uncool, man. That’s the fundamental reason the movement has no direction. If it established a direction, it would alienate the vast portion of dickless carebears it is trying to represent. The idiots in their “general assemblies” continue to promote the idea that direct democracy is not only possible but responsible and sustainable, along with the concept of “nonviolent resistance” that so foils these movements and causes them to become irrelevant punching bags. The only reason revolution became nonviolent is because we as people are no longer remotely as well armed or equipped as soldiers. Start a revolution in 2 C.E. and your average peasant with a large stick had a fair chance of fighting a soldier and winning. Today we’re largely unarmed (because guns are dangerous and weapons used only by criminals) conscientious objectors (violence never solves anything) who expect that everyone around them plays by a set of nebulous rules, even as we break them ourselves. We have an ardent belief that our superior morality will see us through to the end, as god or science or human empathy will save us from what looks like persecution to our ends. So OWS goes out and marches and peacefully assembles and stands around while their peers are arrested and beaten. They walk smiling into paddy wagons, erect with their belief that what they’re doing is right and what the cops are doing is wrong and that karma will sort it out one way or another. Completely useless.

What’s extant, though, is that they’re being arrested. They’ve been overstaying their welcome, they’re finally being shown some respect as potential threats to the modern era. Displaced as that respect may be, esteem in the eyes of the enemy only increases your power over that enemy, and the movement is reaching the stage where either it will explode dramatically and drive a period of civil unrest unknown previously to man, or more likely it will collapse because people are scared and tired and just can’t maintain their energy in the face of such brutal opposition. The opposition has no such lack of energy, as they’re literally doing their jobs: protecting the status quo. They’re paid to do so and that is what they do. Yet the movement still stands, its number only somewhat diminished as outrage flourishes. Why does it flourish? This kind of brutal police action has been the state of affairs for some hundreds of years now. Getting beaten up for no reason by cops is practically standard practice. It pops up in the news all the time, and goes away just as quickly. But this is different today. Today is the dawning of an era where citizen journalism is ubiquitous. The protesters on UC Davis campus were all armed with hundreds of cameras capturing every detail of the events around them. Every major bit of footage in the newsmedia online today is youtubed within hours of the events occurring, filmed by unpaid, unprofessional people that are actively part of the OWS movement. The revolution will not be televised, instead it will appear online, on a communication tool that reaches nearly every single red-blooded American, and certainly every last one in the “young activist” demographic, who have been actively forging mailing lists and tools of communication between each other. The Tea Party’s greatest failing, perhaps, is that it pandered to a section of the population totally unversed in the internet, a segment more than willing to believe that the majority of the internet is a thing of evil, a tool to spread filth among the unsaved, unwashed masses. Though they had a movement, it was largely organized through long-established political organizations in the communities that formed tea partiers, either through local GOP outlets or Eagles/Lions/Shriners/Rotary clubs or other geriatric groups (Casinos as well, I’m sure). OWS, however, is marked first and foremost with a hashtag #occupy, a modern symbol of Twitter. This movement is flooded in internet culture. It’s driven by it. The people involved, the generation involved grew up connected to the internet. OWS is the first real substantial IRL expression of a system of beliefs and understanding of the world created by the ultimate information dissemination tool. This is the Internet’s revolution, not the “mtv” generation or “generation x.” This is what an informed populace actually looks like.

They’re still out there. And there are people who will still be out there month after month. They haven’t changed anything yet, but they’ve done the single most important part of any change, they’ve got people talking about the problems. The old world will struggle to keep up. The old world will label them as bums looking for a free handout, as communists/socialists/anarchists. The political left will bend over backwards to try to galvanize power from their enthusiasm. The political right will try to paint them as politically left (and thus terrible). Everyone will try to get them onto an agenda. Question is, will they buy it? In a day and age where dirt can be found on every interest group as easily as entering a query on google, can the old machinery survive? We might not find out today. OWS might collapse in the face of internal and external pressures. People may lose their nerve, lose their will, lose their direction. But this is what the internet generation is, and this is what their legacy will be as they grow older and replace the geriatric scum who clutch desperately to their idealized concept of the world when they were in their prime. This generation will inevitably be the new geriatric scum. I still don’t think they’re going to change anything. True revolutions only end in bloodshed (see: the American Revolution) and true change only happens when the older generations die out (something of a theme) and neither of those are happening as a result of OWS. However, the movement has been anything but ineffective. That’s why I support it now, because people are talking about and taking seriously true criticisms of capitalism and its abuses. It’s shifted the Overton Window back to the left, if only ever so slightly. We live in tumultuous times, folks. 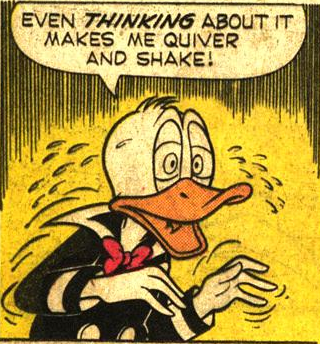 Written by Coyolxauhqui at 11:40 PM